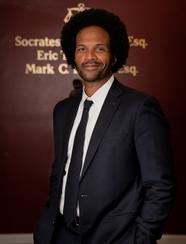 Your Voice In Court!

From a modest upbringing in Lawrence, Ma, Socrates De La Cruz has emerged as one of the Merrimack Valley’s most impactful business, civic, and evangelical leaders.  He has founded and serves as the CEO of De La Cruz Law, a criminal defense and personal injury firm; and De La Cruz Properties, a real estate investment, holding and management firm that boasts one of the largest residential portfolios in the City of Lawrence.  Previously, he served as a trial attorney for McBride and Associates and as an Assistant District Attorney in Essex County.

Socrates leverages his own personal experiences and successes to inspire others and give back to his community.  In addition to founding and running Socratic Inc., a non-profit that offers motivational speaking and awards scholarships to youths in the Merrimack Valley, he also serves as the Vice Chair of the Lawrence Partnership and sits on the boards of Greater Lawrence Family Health Center and Greater Lawrence Community Action Council.  Socrates is also a founding Board Member of LEADS.

In 1998 Socrates received his JD from Suffolk University Law School after receiving his BA from Holy Cross, where he was a Division 1 basketball player.  He credits so many of his early opportunities to his close relationship with the Lawrence Boys and Girls Club, for which he was honored as the National Youth of the Year in 1991, commemorated by a visit to the White House to be recognized by then President George H. Bush.

In 1999 he was recognized by Oprah Winfrey on the Oprah Show for his civic leadership and community contributions. In 2006 Socrates authored a chapter in the NY Times Best Seller A Hand to Guide Me by Denzel Washington, which features other various contributing writers like Muhamad Ali and former President Bill Clinton.

In 2012, Socrates became an ordained minister through the Free Methodist Church USA and currently serves as an Assistant Pastor at the First Spanish free Methodist Church in Lawrence, the same church his grandmother attended for decades.  In addition to preaching and visits to congregants, Socrates is also part of the governing body at his local church. He lives with his wife and 3 daughters in Methuen, MA.  In the few moments when he is not with family, building his businesses or giving back to his community, he is an avid golfer and reader.